"We Have Never Heard Such Words of Hope Before" 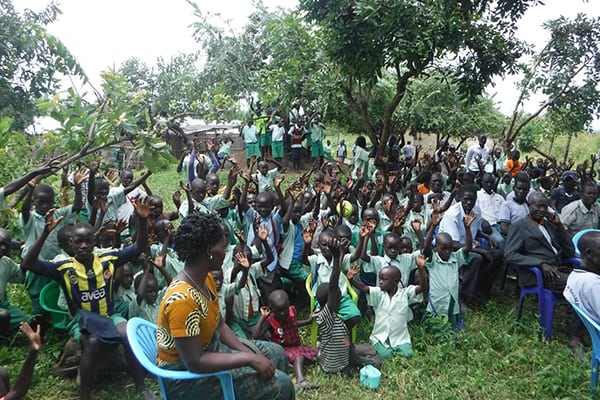 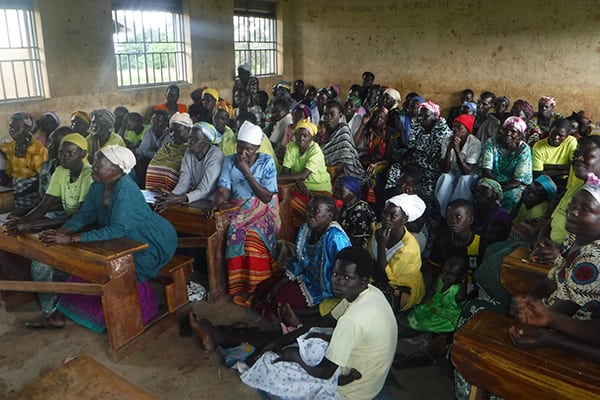 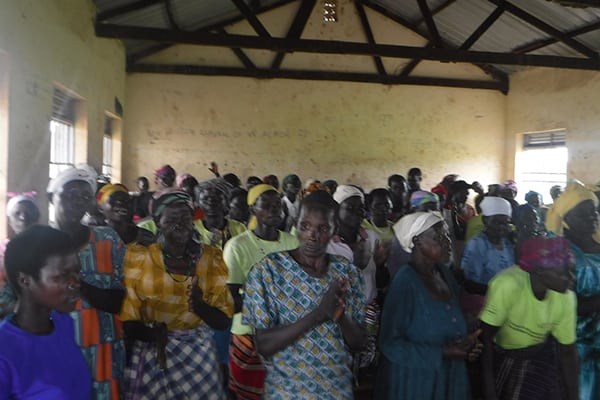 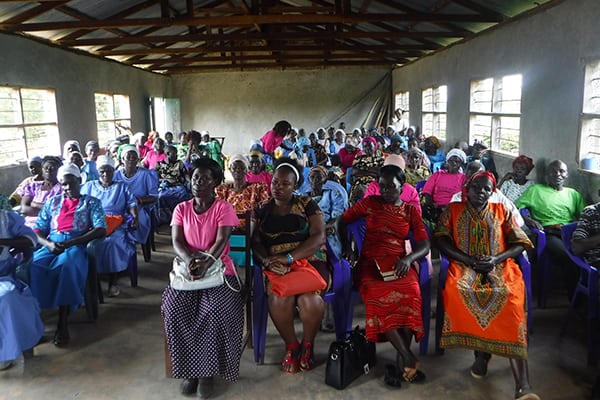 Bringing the Gospel to Remote Regions of Northern Uganda

"The Women Never Knew Christ And Now They Pray Every Week" 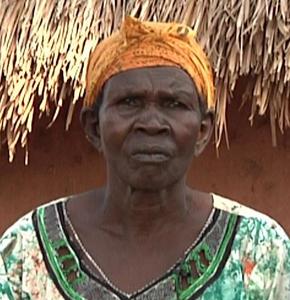 Had a good life in the village. Nice compound with several huts.

Husband was educated at a Jr. Bible College.

At first the rebels came for money, and then for food. When that ran out the family was beaten, including the children. They killed her husband.

Then the rebels came for her. They came daily to rob and rape her in front of her children as there was no one to protect her. Relatives would not help and she was told to stay away lest she bring trouble to them.

Then the rebels came and abducted her with child at her breast. Shirtless, she and baby were taken to the rebel camp where she was continually raped.

She was finally released but had nowhere to go. Everyone would go to the city, Gulu, to sleep at night but she and her children were chased from the safety of the hospital veranda and she and children slept on the street.

Three children were abducted and killed.

Because of famine, she finally went to the IDP camp and stayed there 8 years until government forced everyone to go home.

But what home? She and widows like her were taboo. The distrust and hurt runs deep. During the insurgency, neighbors and family members reported and betrayed each other to rebels. A generation of children grew up not knowing how to dig (farm).

She could not sleep at night. After all this torture you cannot have any happiness inside. It was now 2008.

"Thomas Charities has brought a big change now. It has brought together ladies who suffered. I got saved through the Bible conference and since then I am a Christian. I had problems staying alone but now I have friends because of faith through conference with other women. What I passed through thanks be to God. I pray before sleeping. I have changed. I was worried about life. God helped me survive. God is there for me. Many crops are planted. I can take seed and sell them. I sold my pig from the piggery and bought 2 goats. The goats produced 15 and I was able to buy a cow. Now the cow has produced a calf. It is great what Thomas Charities is doing. The women can share. The women never knew Christ and now they pray every week and appreciated what Thomas Charities is doing."

Thomas Charities now sponsors two of her many grandchildren who have no parents to the village primary school. The village school is supported by Thomas Charities in terms of Teacher training, school supplies, repair and maintenance of their water well and building latrines. 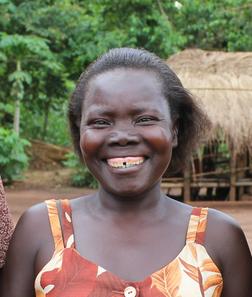 “I am Margaret. I am 54 years. I am not from this area. I belong to a different clan. I got married to a man from this area in 1974. My husband was killed by rebels in 92. We were staying in Koc Goma where the camp (IDP Camp) was. The rebels ambushed the camp and they took a lot people up to Koc Kaleng and killed them there. I hid somewhere in the hut. I have four children. We were not able to find him. There were a lot of dead bodies there. We did not have a chance to bury him.

The life that I am now rebuilding is through prayer. I have come to realize that is only through prayer that strengthens me and that is how I am taking care of the kids. They have grown up and I am struggling with them. I still am wearing my wedding ring. With this ring I am still keeping my promise. So it is sad now to take care of the children and then the children will take care of me. I will not get married again.

I came to know Thomas Charities through a friend who was one of its beneficiaries. My friend’s husband passed away from AIDS recently. She is the one who gave me advice to go to Thomas Charities. They will encourage you and work together there. That is how I became a part of Thomas Charities. I am still farming. I was with the first lot who worked with the piggery. For me, the changes are personal. Food is not now a problem. They always share. They work together. The children are the problem. They never went to school and once you miss the chance to school you never recover it back. And secondly staying in the camp brought a lot of other problems - some they produce a child at 16 yrs old not knowing who the father was. That is why our problem is always continued like that. [This is why there are so many children without parents. Someone will impregnate you and run away and leave you alone. Not even coming to find out if you conceived.] It is bad for children - I cannot get big money to send them to school. I am okay. My daughter had a child and left. My daughter's husband was killed for being a poacher. I am taking care of 4 grandchildren. The message I can give to people outside is you cannot be alone. If you are alone your head is filled with a lot of thoughts but I am now feeling better.”

I am free
I am changed

“I grew up with a mother and a father. When I got married I came to my husband’s home and began meeting with a lot of problems beginning with the funeral of my mother-in-law. She was burnt in the hut by the rebels. After about a month, rebels came back and tied me to a tree. They took my husband and killed him in front of me. After they shot him they ran away leaving me tied to the tree. After some time, other people came to see what was going on and untied me. My husband had been shot in the head and there was a lot of blood. I brought him into the hut and I ran away. Now we had a lot of pigs. When I ran away, the pigs entered the hut and ate the husband. So when I came from hiding in the bush, we buried my husband. 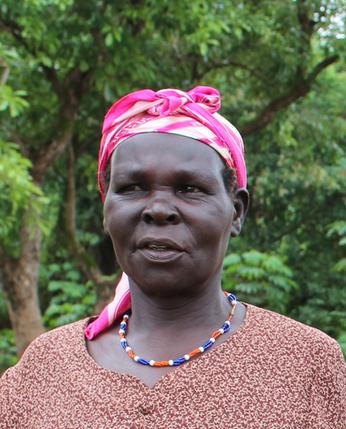 After the burial of my husband the rebels came and were firing into the air and everyone was running. I ran away and hid when they were firing but the rebels tracked us by the foot trail and they took one of my 9 children. They killed my child. When I tried to follow them there were many corpses and they were all undressed and I couldn’t find which one was mine so I just carried one and buried it.

After the burial is when people started going to the camps (IDP -Internally Displaced Camp). That is when I also went to the camps. I suffered with the orphans at the camp.

Before we went to camp, you have to understand that Acholi would dig (farm). Now the women were raped. This leg got broken because the rebels liked sleeping with me so I wouldn’t reject them and run away. Give money. Give goat. Give money. Give goat. Give until it is all finished. Most of them they have guns and they have knife. You should not see their face. You cannot recognize them. They will chop off your head.

So I went to the camp. You could get food from IDP camp but there was a famine that was killing the kids. So we stayed in the camp for 7 years. So after that you understand camp life. Most kids didn’t go to school. I have 8 children who did not go to school. One has been recently murdered and left 3 kids. There is no more running hiding in the bush and at least we are sleeping. In process of going back home at least now I am digging at home. Now yes I have small hope. I have children that left. One daughter died last year. So in 2 months 2 have died. If you leave them they become thieves.

At least according to what I have gone through I am now interacting with other women that Thomas Charities has formed. They give advice and the conference that I went through has brought some hope. I have come to realize that being with other women is one advantage to give courage, and strengthen me spiritually. Every two weeks we get together. Thomas Charities has brought great change. I can even show you - I used be like this (slumped over lethargic, unmotivated) but now I can move like this and can go and sell at market and play with women. And can forget – I have come to Christ because of the conference. I am happy since the conference. I have joined a church and am praying. When they preach scripture I feel like I am in the Word now and I am free. I am changed you can see how I have changed as you can see, even physically.

I encourage others to join Thomas Charities because we have organized a group not based on just one thing. Farming is there and piggery is there. What little we get we share and then we advise each other. For me I never knew that I could be transformed to this level. So whenever someone comes with same problem I advise where necessary. You understand when you are in the group each one has different kind of advice. You will change somehow. Things can happen in different ways than what you can expect. Prayer is the answer. The advice is to trust God.”